The Joy of a Community Garden 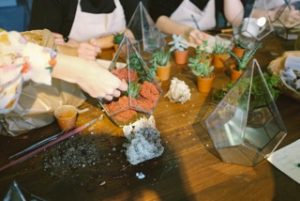 The four walls were covered in thick green ivy. It was impossible to see where a gate might have been. Walking in the gray winter midst of the Yorkshire moors, young Mary would dream of getting inside. Although she didn’t know it yet, it had once been a beautiful walled garden. Ten years earlier the gate was locked and now there was no way in. If she could only find a way, it would be her secret place.

Perhaps you remember the beautiful children’s classic, The Secret Garden, written by Frances Hodgson Burnett (1849-1924). In it, a ten-year-old orphaned girl came to live in a lonely old house in England. There she discovered an invalid cousin and the mysteries of a locked garden. One day, quite by accident, she saw a section of earth where a robin was searching for a worm. She noticed something buried there and it turned out to be a key. She so wanted it to be the key to the gate. Mary carried the key in her pocket every day, in hopes of somehow finding the gate. Finally, during a heavy gust of wind, the ivy blew back and she thought she saw something underneath. It was a metal knob. She put the rusted old key into the lock, opened the gate, and slipped inside. Everything was brown and looked as though it was dead. She returned everyday, pulling weeds and digging around old rose bushes. Then one day it happened. She saw, peeking from the ground, the green tips of bulbs, planted years before. Spring was coming. Soon Mary’s garden was filled with blossoming trees, roses of every color, yellow daffodils and purple hyacinths. Fragrance filled the air and birds sang their sweet songs.

Eventually, without anyone seeing, she was able to wheel her invalid cousin into the garden. As the story unfolds, wonderful things begin to happen. The days spent in the garden were invigorating and healing. Everyone was waiting for the frail boy to die and instead he began to live. He learned to stand, then walk and then run. The children called the garden magic for it was producing miracles. When the young boy Colin, also ten, realized how well and how happy he was, he began to chant – “I am going to live forever, I am going to live forever.”

Many years ago, Hollywood made a movie of this book. It was all filmed in black and white, but there was a great surprise to come. When Spring came and Mary took Colin to the garden for the first time, when they went through the gate the garden turned to vivid Technicolor; plants, flowers and trees abloom everywhere. It was spectacular.

There is a special drawing power of gardens. This is probably why many towns have Community Gardens. What, exactly, is a Community Garden? Is it a lush park where everyone can go to enjoy the fresh air and the smell of newly mown grass?  You might spread out a blanket and enjoy an old fashion picnic or bring your dog along for a game of fetch. Maybe it’s a beautiful botanical garden where you can stroll along through the various plants and flowers. Then again, it might be something altogether different.

Some communities offer plots of land where people can come and plant their own little gardens and some groups even plant gardens for the homeless to gather food. If you have ever vacationed in Europe and toured the grand old castles, you will find expansive and well manicured gardens for everyone to enjoy, complete with fountains and statues and all things impressive. The fact of the matter is – gardens come in all kinds of forms and with all kinds of purposes.

There is a Persian word (pairidaeze) that means “a walled park” or “an enclosed garden.”

This is our word for paradise. In the Greek translation of the Old Testament, the Greek word for paradise is used to describe the Garden of Eden. Adam and Eve were given this garden to live in and to care for. There, along with all the animals, they lived in peace and harmony. In the Genesis story, we find that Adam and Eve were turned out of their garden paradise and down through the ages people have spoken sadly of paradise lost.

Later, paradise became the word to describe the place we know as heaven. At the crucifixion, Jesus told the thief on the cross next to him, “Today you will be with me in Paradise.” Here is the good news. Paradise is not lost. It remains today.

Because the word paradise is used to describe both the Garden of Eden and Heaven, it has to be describing something beautiful beyond description. This is no Secret Garden – everyone can find their way there. What will it be like? Quoting from I Corinthians 2:9,

“No eye has seen, no ear has heard, no mind has conceived what God has prepared for those who love him.”

MAKING CONNECTIONS (Test #1)
To move out of loneliness and into a full and meaningful life requires making right choices and a positive attitude. Lonely people generally spend too much time by themselves and not interacting with others. Sometimes you just don’t know where to start or how to find the connections you desire. Following are questions designed to help you see why you may need to make changes that will lead you to a more fulfilling life.