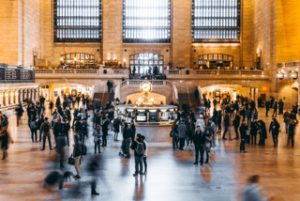 As the sun began to set and the dark of night was upon them, the weary travelers arrived at their destination. The town was full of other travelers also looking for a place to stay for the night. Judging from all the hustle and bustle, it was obvious that something very important was happening. Stop after stop they were met with the same thing – No Vacancy! The Visitor’s Center was of no help at all. What were they supposed to do?

After having come a very long way, all the tired travelers wanted to do was just find a place to rest. They needed to find somewhere they could just lay down and sleep for a while. Every place they tried was met with the same words – “There is no room for you here”. As the hours wore on and the dark of night surrounded them, it became quite clear; there was absolutely nothing available. No doubt feeling distressed, the husband continued to persevere. What made this all the more concerning is the fact that his wife was expecting their first child. She grew even more weary because the time of her baby’s birth was at hand.

Finally, they found a room. It wasn’t clean like they would have liked and it smelled bad as well. But, it was finally a place to stop and to rest. As morning dawned, the gentle cry of a newborn baby filled the air. During the night, a small visitor had arrived in the little town. No one cared or even knew that he had come. They were all too busy tending to their own affairs. Little did they know that this tiny visitor would one day become someone of great importance and they had missed it all.

Have you ever set out on a journey and found yourself rejected? Maybe the hotel clerk didn’t have your reservation, even though you had made it a long time in advance. With a convention or the Super-bowl in town, all the other hotels were completely full. Finally, on the outskirts of town, you found accommodations. You would never choose a place like this! Unhappy with the low standards of the room as well as the awful location, you found you had no choice but to stay there. Perhaps you can relate to this situation having experienced it. Or, you can just imagine how miserable this scenario would be. You know you deserve better. You may even have a thought like this one, “Do they even know who I am?” “If they only knew who I was, they’d find a place, probably even a suite!”

The story above is a true one. The baby born that night grew up to be famous and well- known all around the world. However, his life was not an easy one. Probably more than once he’d had the very same thoughts that you’ve have had when you have been treated poorly, “Do they even know who I am?”

So who did this little baby grow up to be and why is it important to us? It has been nearly 2,000 years ago that this story began. The little town that his parents traveled to was Bethlehem, his mother was named Mary and his father was Joseph. They named him Jesus. He was the little visitor that came that long ago night and he stayed for 33 years. The reason his birth is so important is because he came from God, his Father in Heaven. He was born a Jew and in those days they were under the harsh rule of Rome. The Jews wanted him to set up his kingdom there, to take over control. It was hard for them to understand ‘who he really was.’

He was as physical as you and I, and he spent his days caring for the people’s needs and healing the sick. He took jars of water and turned it into wine. He performed many miracles. Everyone could see that there was something very different about this man. He was a teacher and taught the people about the Son of God and of the kingdom of God. He told the people to follow him and to learn from him. He talked about how we should treat each other. He said he came to serve, not to be served and instructed his followers to do the same. He was a good man, in fact he never did anything wrong. Yet, the leaders of the day set about to kill him. Why? He was upsetting their applecart, so to speak, and they wanted him out of the way.

In the end, guiltless, they tortured him and they killed him. As this was happening, he spoke to his Father and said, “Father, forgive them for they do not know what they are doing.” (Luke 23:34 New International Version) Again we are reminded of our own thoughts, “Do they even know who I am?” For if they had known, understood, that he was God’s one and only son, they would not have dared to kill him. Maybe they chose not to believe who he was. The little baby, born so long ago, was born to be a king. Written on a sign over his head as he suffered and died on a wooden cross were these words: “This is Jesus, King of the Jews.” (Matthew 27:37 NIV) He taught that his kingdom is not of this world. His kingdom is for every person ever born. It is available to all who seek him. The visitor that came that dark night in Bethlehem need not be a visitor any longer. He said follow me. If we do, he promises all of us the gift of life (Romans 6:23 NIV) and a home with him one day.

Traveler, tired and weary, there is everlasting rest. Jesus said, “Come to me, all you who are weary and burdened, and I will give you rest…” (Matthew 11:28-30 NIV)

MAKING CONNECTIONS (Test #1)
To move out of loneliness and into a full and meaningful life requires making right choices and a positive attitude. Lonely people generally spend too much time by themselves and not interacting with others. Sometimes you just don’t know where to start or how to find the connections you desire. Following are questions designed to help you see why you may need to make changes that will lead you to a more fulfilling life.